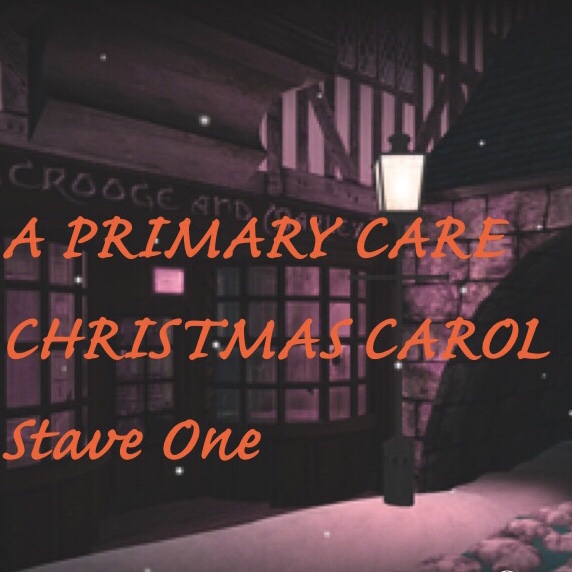 Stave One – in which Scrooge reveals just how burnt out he really is.

Old Dr Marley was dead. As dead as the NHS would be within a couple of years if things didn’t start to improve soon. And, as far as Dr Ebenezer Scrooge was concerned, Jacob Marley was better off out of it. Scrooge and Marley had been long term partners and Scrooge greatly missed his former colleague who had died several years earlier. This was not the result of any affection he had had for the man, that was not in Scrooge’s nature, but rather on account of the fact that, due to the national shortage of GPs, he had been unable to find a replacement, and his workload had consequently increased beyond the point of being manageable.

It was Christmas Eve and Scrooge was sat at the desk in his consulting room. It was nearly three in the afternoon. Morning surgery had only just finished and this was now what was laughably called his ‘lunch break’. An email flashed up on his computer screen. It was from the CCG wishing him a merry Christmas.

‘Bah!’ muttered Scrooge to himself. ‘Humbug! If they really wanted my Christmas to be merry, then perhaps they and NHS England could have agreed that I didn’t have to make up the Advanced Access hours, lost from not opening the surgery on Christmas Day, later in the week. Every idiot’, he continued, ‘who goes about with ‘Merry Christmas’ on his lips should be submitted to unnecessary colonoscopic examination and be forced to reflect on the experience for the purposes of revalidation.’

Dr Scrooge was not one to enjoy Christmas, and being encouraged to be merry served only to darken his already black mood still further. The situation was not helped by the arrival of a receptionist who announced her presence with a knock on his already open door.

‘Sorry to trouble you Dr Scrooge, but the Salvation Army band are playing Christmas carols in the car park and are asking if you would like to make a donation.’ She handed him a leaflet informing him that this Christmas many people would not have anywhere to sleep due to the lack of hospital beds resulting from years of chronic NHS underfunding. Scrooge sighed – this was nothing he didn’t already know. Only that morning he had been asked to arrange a review over the holiday period of a patient that was about to be discharged, a little earlier than was ideal, from the local, desperately overworked, hospital. Though he regretted being unable to promise that level of care, his refusal then had been unequivocal and he was no more minded now, at his own personal expense, to start financially propping up a system left destitute by the establishment. As far as he was concerned, he was already paying quite enough tax and, given that he had just learnt that the security of his pension was now somewhat precarious, he felt it was unlikely that he would change his mind on the matter. He stood up and slammed the door in his informant’s face. Sensibly, the receptionist interpreted that as a ‘No’ and scuttled back to where her colleagues were celebrating Christmas with a box of mince pies and a tube of Prosecco and pink peppercorn Pringles – the latter, notwithstanding the alliteration, surely an ill advised flavour choice, regardless of the season.

Scrooge had been invited to share in the festivities but he had no desire to do so. Nor did he have time. Instead he returned to his computer screen and started the never ending task of clearing his inbox of lab results, hospital letters, and prescription requests. He’d barely started when there was another knock at the door. Scrooge barked out a ‘What is it?’ and the door swung open to reveal the ST3 who had been with the practice since August. Dr Robert Cratchit was a highly capable doctor though one who lacked confidence in his own ability. To Scooge’s dismay he was wearing a Christmas jumper.

These words were not unfamiliar to Dr Cratchit, who, over the previous five months, had heard them frequently from the man who purported to be his trainer. In fact, so frequently had he heard them that, for a time, he had used them to start all consultations with patients, imagining them to be the profession’s approved opening words for all doctor/patient interactions. A failed attempt at the CSA and the associated considerable expense of applying to sit the exam again had indeed taught him much. Familiarity however did not make it any easier for Dr Cratchit to approach a man who never offered advice without showing contempt for the one who asked for it. For although Scrooge had received training on giving feedback, he had, much to the dismay of his appraiser, consistently failed to demonstrate any change in his behaviour as a result of such practice improving activity.

‘I was j-just wondering if it would be convenient if I were to g-go’ Cratchit stammered. ‘I’m only supposed to do one clinical session today and, though the planned patch t-tutorial for this afternoon has been cancelled, I thought that, since you allocated me all the visits, you m-might let me skip off a little early this afternoon. It is Christmas after all and I would so appreciate having the extra time to be with m-my family.’

Scrooge glowered. ‘Of course it’s not convenient. And I don’t suppose you’ll be offering to work a couple of extra Saturday mornings in lieu of the day you’ll no doubt be taking off tomorrow. That’s the trouble with young doctors these days. No commitment’

The ST3 smiled faintly and waited nervously. ‘Go on then, leave’ Scrooge eventually conceded, ‘But if anything goes amiss this afternoon and I’m compelled to reflect on some significant event or another, I know where my reflections will lay the blame. Just make sure you’re in early on Thursday.’ Cratchit thanked Scrooge and slipped away, leaving the burnt out old clinician alone with his thoughts and the prospect of a three hour afternoon surgery.

As things turned out the rest of the day was mercifully quiet with Christmas Eve being the one afternoon of the year which provided the general population with something more interesting to do than seek medical advice regarding their minor health concerns. As a result, Scrooge locked up the practice early and arrived home before nine. He’d stopped on the way to pick up a bite to eat but, having consumed it en route, the only thing he had to look forward to on arriving back was, as most evenings, the prospect of going to bed.

As he got out of his car, a fog hung about the driveway of the old house, that he’d bought some years before. Scrooge approached the front door, the fog seeming to cling to him as he walked. It was then that he noticed, in place of the ancient door knocker, what was clearly the face of his old partner, Dr Marley. The apparition lasted but a moment before Scrooge, unsettled by the sighting, hurried on, unlocking the door and subsequently forcing a pile of unsolicited medical periodicals to one side as he entered the house. He locked the door behind him and climbed the stairs to his bedroom.

Scrooge undressed and put on his night attire. As he sat gazing into the middle distance, contemplating once more the strange appearance of the door knocker, there came an unexpected ringing sound that filled him with inexplicable dread. Scrooge scrambled in his pocket for his phone. However, as the caller’s number was withheld, he, as was his custom, ignored what was almost certainly a nuisance call and continued his preparations for bed. And then he saw it. A sight that caused him to be more horrified than he’d ever been before – even more horrified than that morning when his appointments had included seven heart sink patients and three more complaining of being ‘Tired all the time’. Before him, as unwelcome as critical emails from the head of Medicines Management, stood the ghost of Dr Jacob Marley.

Scrooge, nothing if not a man of reason, rose up and spoke to the spectre in an accusatory tone.

‘You don’t believe in most NICE guidelines and yet they exist’ countered the phantom.

‘That’s true’, Scrooge was forced to concede and with that he sat back down in his chair. He paused a moment then, looking the ghost full in the face and acknowledging his existence, asked the reason for his visit.

‘I have come to warn you Ebenezer. There is yet a chance that you may escape what has become my fate. I am condemned to walk the earth for all eternity burdened by these chains – chains composed of nonsensical bureaucratic demands imposed on me by those who understand nothing of medicine and seek to use the profession for their own political ends. You have forgotten, Ebenezer, what being a doctor is really all about. You have forgotten the joy that your work once brought you and now you practice as a mere shadow of the clinician you once longed to be. You’re burnt out Ebenezer. Something needs to change.’

‘You will be haunted by three spirits,’ continued the ghost, ignoring Scrooge’s cynicism. ‘They will teach you all that you need to know. Without them you cannot hope to shun the path I now tread. Expect the first when the clock strikes one’.

And with that the ghost of Jacob Marley departed, groaning incoherent sounds of lamentation and dragging the weight of his chains behind him. Scrooge stood motionless for he knew not how long. Then, mindful of his need for rest, he climbed into bed. Picking up a copy of the BJGP, he fell asleep upon an instant.

To read ‘How the Grinch and Covid stole General Practices Christmas’, click here

To read ‘Twas the night before Christmas – 2020’, click here

To read ‘A Merry, and Resilient, Christmas’, click here

To read ‘The Happy Practice – A Cautionary Tale’, click here

To read ‘The Three Little GPs and the Big Bad Secretary of State for Health’, click here

To read ‘Jeeves and the Hormone Deficiency’, click here

8 responses to “A PRIMARY CARE CHRISTMAS CAROL – Stave One”