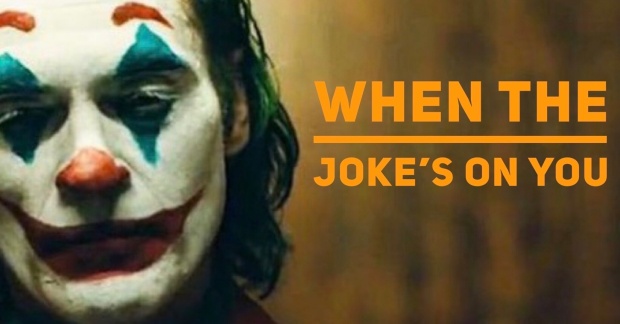 Arthur Fleck’s was not a happy life.

Last weekend I went to see Joaquin Phoenix in ‘Joker’. It’s a remarkable performance in a film that portrays Arthur Fleck endeavouring to earn a living as a clown whilst still harbouring dreams of making it as a stand up comedian. This was before he embarked on the life of organised crime that led to him becoming Batman’s most famous and most psychologically disturbed adversary. The film reveals the effect on Arthur of having been physically and emotionally abused as a child, rejected by a society intolerant of anyone deviating from behaviours considered to be the norm, and failed by the system that was supposed to offer him the support he so badly needed.

The mental breakdown that followed was surely inevitable. At one point he admits that all he ever has is negative thoughts and is left asking ‘Is it just me or is it getting crazier out there?’ He ends up on multiple medications which fail to make him feel any better and then, despite his ongoing need for it, has the professional support he had previously been given precipitously withdrawn. Frustrated by the fact that ‘the worst thing about having a mental illness is that people expect you to behave as if you don’t’, he is left alone in the world, wanting only to ‘not feel so bad anymore’.

Arthur knows, both literally and figuratively, what it is to be kicked when he is down. Eventually he can take no more. With nobody in sight to fight his corner, he sees no option than to come out fighting for himself. Consequently he behaves in ways that go far beyond that which the law permits and in so doing crosses a line that leaves us asking ourselves whether he is mad, bad or simply the sad but inevitable product of the experiences he has had to endure.

Though on the face of it they are very different films, there is much that ‘Joker’ and ‘Judy’ have in common. Whilst they both explore the consequences of having experienced adverse events in childhood and the years that follow, the films differ both in regard to how the titular protagonists are shown to respond to their respective predicaments and in the questions they cause us to ask ourselves as we look on. In ‘Judy’ we see one who, attempting to numb her emotional pain, strives all the more to find approval and we are left asking how people could have treated her the way they did. In ‘Joker’ we see one who having given up the search for someone who truly cares about him, responds in kind, by giving up caring about anyone else. And we are left asking, not only how people could have treated him the way they did, but also how we treat such people ourselves.

In our work we all come across both ‘Judys’ and ‘Jokers’. Though the reasons for why individuals from each group behave in the way they do are more similar than we might care to acknowledge, we, like society as a whole, are prone to treat them in very different ways.

The ‘Judys’ of this world tend to be those we sympathise with, those we are prepared to try to understand and to whom, in our efforts to help, we are willing to move towards. Though at times emotionally draining, they don’t threaten us since, compliant in their distress, they generally remain appreciative of our efforts.

This is in stark contrast to the ‘Jokers’ of this world. Anxious, for fear that by doing so we might be thought to condone their behaviour, we are reluctant to sympathise with ‘Jokers’ and are, therefore, prone to judge them more harshly than is perhaps fair. Rather than trying to understand the reasons for what they do, we prefer to insist that such people take full responsibility for their actions. In so doing we can too easily deny them the help that they so badly need even though we may be left with the uncomfortable feeling that, were we to find ourselves in similar circumstances, we might act just as ‘irresponsibly’ ourselves.

Furthermore, uneasy that, by being part of the society that has contributed to making them who they are, we might be partly culpable for their behaviour, and more uneasy still on account of our inability, and, perhaps, reluctance to help, we comfort ourselves by too readily jumping at the opportunity to blame them for their supposed inadequacy. Though we may not feel physically threatened by such people, we are, on account of their ‘inconsiderate’ and persistent ‘failure’ to respond positively to our advice, threatened professionally. And so we distance ourselves from such individuals by the labels we apply to their so called deviant and disordered personalities. Absolving ourselves from our responsibility to help, we thus can end up leaving them more alone than ever, devoid of any hope and even more entrenched in their deeply desperate situations.

This, of course, is not to suggest that we should take full responsibility for the actions of others and burden ourselves with the notion that we are the answer to all of society’s ills. On the contrary, people must take responsibility for what they do and we must remember that we are just medical professionals, that the problems these patients face are far beyond our capabilities to solve, limited as we are both professionally and personally. But we should, I think, be careful that, as a consequence of our attitude, we don’t make things worse for them. We need to make room for a little understanding of their situation, to show them a little grace rather than take such a hard line that we compound their problems. I know from this past week that I at least should take more care in this area.

But it’s not just our patients who struggle. Many within the medical profession struggle too, and often for the same reasons as those who come to us for help. Medicine is a world where the expectations of those within it are high and clearly defined. Any variation from the sometimes arbitrarily prescribed professional standards of behaviour that are expected of us are poorly tolerated. It is a world where the abuse of those inhabiting it is far too common, and one where those who struggle are too often urged to simply cope without the support that ought to be in place.

How those in difficulty within the profession manifest their struggle is analogous to those without. Burdened by a system that has asked too much and offered too little, there are, on the one hand, the ‘Judys’ who respond by striving ever harder to achieve. When they eventually go under they do so as those who look on sympathise with their plight. On the other hand are the ‘Jokers’, those who can give no more and so stop trying. They have nothing but negative thoughts and don’t doubt that it really is getting crazier out there. Admittedly few resort to the violence characteristic of the Joker, were they to do so they’d be well advised to step away from the scissors and take a break from their minor surgery responsibilities. But, none the less, overwhelmed and feeling uncared for, some lose their ability to show compassion for others. As a consequence, rather than being viewed sympathetically, they find themselves rewarded with our censure, disciplined for not caring in the way we deem they ought and left without the support that might just have helped them survive.

In the film, Arthur Fleck makes a statement in which he claims that it is the system that decides what’s right and wrong, that decides what’s funny or not. But with the assertion that comedy is subjective, he implies that what is right and wrong is similarly subjective. Thus, judging ourselves on a curve, we define wrong behaviour as that which we consider as worse than how we would behave ourselves. And so, by convincing ourselves that we are better than those we look down upon, we find comfort in believing that we are OK. We applaud ourselves whilst conveniently forgetting the advantages that we have enjoyed and which have enabled us to achieve to the degree that we have.

Likewise, with regard to those who struggle in medicine, who is to say which is the better way to burn out? Why is it that we reserve our sympathy for those who care less for themselves as they try too hard to care for others and disapprove of those who, feeling uncared for, find themselves giving up caring altogether?

Might it be that the world of medicine is too invested in its high ideals, ideals beyond the attainment of any of us who work within it? In attempting to preserve medicine’s saintly image, might it be that self sacrifice is seen as inherently virtuous and implicitly encouraged whilst those mere mortals with limits to their compassion, are demonised for their deviant normality? The former are treated better since, even in their struggles, they still belong. They uphold the noble ideals of a profession that seeks to distance itself from those honest enough to want to rebel against the system that has little mercy for those it sees as a poorly performing underclass. Failure is seen as nobody’s fault but those who fail, and never the consequence of a system that fails to support those who feel they can carry on no longer.

What ever the causes of the variant forms of struggle, the truth is that both ways of burning out are equally regrettable, equally unhealthy, equally tragic. Regardless of how it is manifested, rather than judging those in difficulty, we need to address the causes for burn out and take the necessary steps to stop it occurring in the first place.

And that has to start by a concerted effort to eliminate the abusive experiences too many doctors experience in their careers, to support individuals more fully throughout what is undoubtedly a difficult career, and to stop judging those who find it hard by demonising them for the failure of the system in which they work. We may not be able to solve all the difficulties that our colleagues are experiencing, but we can at least try not to make things harder for them by having an unhelpful attitude towards them.

But, you might say, the Joker is a fictional character and of course you’d be right.

But the struggles some of us experience are all too real.

And they’re no joke.

For some further related thoughts on the film ‘Judy’, click here

For some thoughts on when responsibility for poor outcomes lies with us, click here